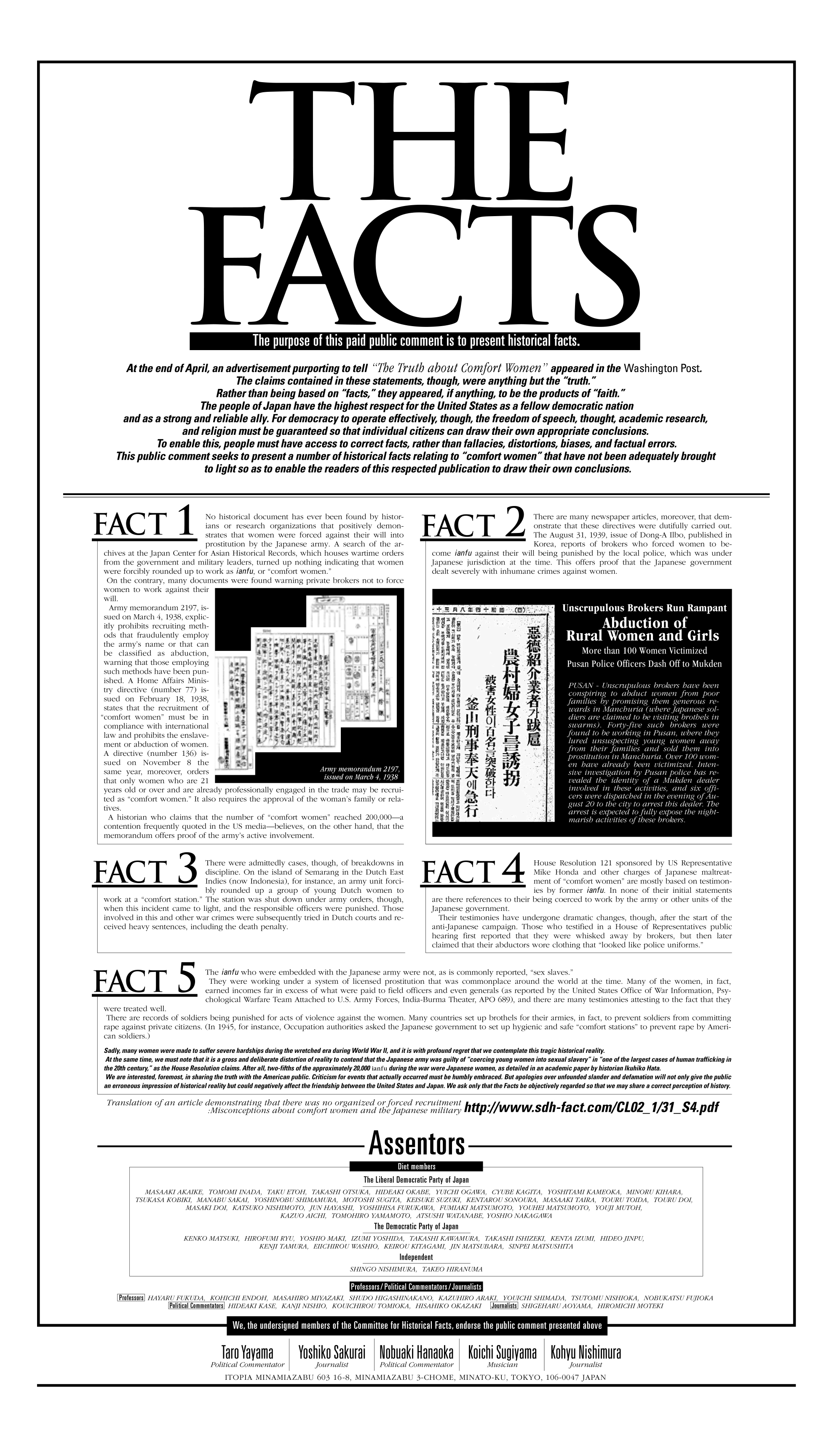 A group of Japanese lawmakers in a full-page ad in the Washington Post on June 14, 2007, denied the Japanese government and military had a hand in conscripting women from Asian countries as sex slaves for the Imperial Army during World War II. Its excerpt from a blog:


FACT 1
No historical document has ever been found by historians or research organizations that positively demonstrates that women were forced against their will into prostitution by the Japanese army. A search of the archives at the Japan Center for Asian Historical Records, which houses wartime orders from the government and military leaders, turned up nothing indicating that women were forcibly rounded up to work as ianfu, or "comfort women."

On the contrary, many documents were found warning private brokers not to force women to work against their will. Army memorandum 2197, issued on March 4, 1938, explicitly prohibits recruiting methods that fraudulently employ the army’s name or that can be classified as abduction, warning that those employing such methods have been punished. A Home Affairs Ministry directive (number 77) issued on February 18, 1938, states that the recruitment of "comfort women" must be in compliance with international law and prohibits the enslavement or abduction of women. A directive (number 136) issued on November 8 the same year, orders that only women who are 21 years old or over and are already professionally engaged in the trade may be recruited as "comfort women." It also requires the approval of the woman’s family or relatives.

FACT 2
There are many newspaper articles, moreover, that demonstrate that these directives were dutifully carried out. The August 31, 1939, issue of Dong-A Ilbo, published in Korea, reports of brokers who forced women to become ianfu against their will being punished by the local police, which was under Japanese jurisdiction at the time. This offers proof that the Japanese government dealt with severely with inhumane crimes against women.

PUSAN -- Unscrupulous brokers have been conspiring to abduct women from poor families by promising them generous rewards in Manchuria (where Japanese soldiers are claimed to be visiting brothels in swarms). Forty-five such brokers were found to be working in Pusan, where they lured unsuspecting young women away from their families and sold them into prostitution in Manchuria. Over 100 women have already been victimized. Intensive investigation by Pusan police has revealed the identity of a Mukden dealer involved in these activities, and six officers were dispatched in the evening of August 20 to the city to arrest this dealer. The arrest is expected to fully expose the nightmarish activities of these brokers.(*extracted from an article on Dong-A Ilbo issued on August 31, 1939)

FACT 3
There were admittedly cases, though, of breakdowns in discipline. On the island of Semarang in the Dutch East Indies (now Indonesia), for instance, an army unit forcibly rounded up a group of young Dutch women to work at a "comfort Station." The station was shut down under army orders, though, when this incident came to light, and the responsible officers were punished. Those involved in this and other war crimes were subsequently tried in Dutch courts and received heavy sentences, including the death penalty.

FACT 4
House Resolution 121 sponsored by US Representative Mike Honda and other charges of Japanese maltreatment of "comfort women" are mostly based on testimonies by former ianfu. In none of their initial statements are there references to their being coerced to work by the army or other units of the Japanese government.

Their testimonies have undergone dramatic changes, though, after the start of the anti-Japanese campaign. Those who testified in a House of Representatives public hearing first reported that they were whisked away by brokers, but then later claimed that their abductors wore clothing that "looked like police uniforms."

FACT 5
The ianfu who were embedded with the Japanese army were not, as is commonly reported, "sex slaves." They were working under a system of licensed prostitution that was commonplace around the world at the time. Many of the women, in fact, earned incomes far in excess of what were paid to field officers and even general (as reported by the Unites States Office of War Information, Psychological Warfare Team Attached to U.S. Army Forces, India-Burma Theater, APO 689), and there are many testimonies to the fact that they were treated well.

There are records of soldiers being punished for acts of violence against the women. Many countries set up brothels for their armies, in fact, to prevent soldiers from committing rape against private citizens. (In 1945, for instance, Occupation authorities asked the Japanese government to set up hygienic and safe "comfort station" to prevent rape by American soldiers.)

This is not the opinion of the "ultraright" because 13 lawmakers of the Democratic Party of Japan, the opposition party, sign this ad.

uuuccc said…
When 1945 Japan was defeated by WW2, a report was made by US army about the Comfort Women of Japan army.

The reports was tell us, those women at WW2 was worked for own free will, and all of them was fully satisfy by well payment and treatment, then they have nothing to be complain.

By the chaos of Korean War no exact count is remains, and mostly of them may be killed.

The kidnaped Korean Comfort Women is not exists in WW2, but they are exists in Korean War.

The kidnaped Korean Comfort Women was evidenced the war is Korean War, but few of WW2 women is mixed with them, then evidence is mixed Korean War to the WW2.

Those women must be separated by WW2 or Korean War, but Korean do intentionally mixed them, and they deceive it be WW2.